How Dr. Glenn Got Started 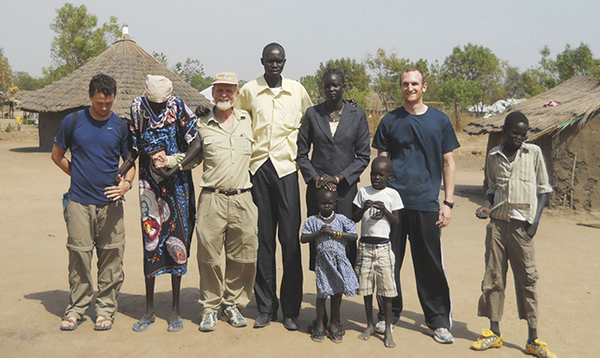 Dr. Glenn Geelhoed, AB, BS, MD, MA, DTMH, MA, FACS, is founder of Mission to Heal, an advisor to NIFA, and an occasional instructor in NIFA’s RNFA SutureStar workshops. This year he will be honored for 50 years of work in Africa. He has an impressive academic record, including not only medical degrees but also masters’ degrees in international affairs, epidemiology, health promotion and disease prevention, anthropology, and a philosophy degree in human sciences. He has written several books and more than 500 published journal articles, is a professor of surgery at George Washington University Medical Center in Washington D.C., and has received many awards. You can a read short bio here. This is the first in a series of articles we will be running about Dr. Glenn and his work with Mission to Heal.

When Dr. Glenn Geelhoed was a freshman medical student, he heard about an opportunity to help kids in the third world who were dying of diarrheal disease.

“There was a simple method of treatment, if you could find a way to start an IV and get a catheter into them,” he says. “It was simple, it was cheap. There wasn’t a nickel’s worth of investment required to learn what was the cause of death—it was just a matter of political will and the economics of being able to get there.”

He got himself down to the Dominican Republic and found himself in a setting with blue ocean, gleaming sands, palm trees waving. A Caribbean paradise. Except that, shortly after his arrival, helicopters appeared behind those palm trees and there was strafing on either side of him. He was in the middle of the republic’s civil war, and Lyndon Johnson had sent in the 82nd Airborne.

That might have given some folks some pause, but Dr. Glenn thought, well, look, I’m here, and there are all these needy people who aren’t really part of this process of power struggles. They’re just trying to stay alive and keep from dying. He thought maybe he ought to look after them first and find out all about the politics and military and economics later. And then a little light came on.

“I said, wait a minute. I’ve got the whole US Navy here with the USS Boxer aircraft carriers. I’ve got helicopters flying overhead. I’ve got landing craft hitting beaches. I’ve got the entire US first world economy sitting around doing time because there wasn’t much of a military struggle; they just came on down to show the flag and force the cause. Why not?”

This was in the days before email or the Internet. Dr. Glenn had one simple little skill—essentially obsolete now—he could use a ham radio. He discovered he could create a phone connection by patching from the radio, and offered a serviceman the opportunity to talk to his mother in Kentucky. Word spread, and pretty soon he was helping one of the commanding officers patch a call through to home. Afterwards, the officer said, “If there’s ever anything I can do for you . . .”

“Hold that thought,” said Dr. Glenn. “Right this minute I’ve got 16 tons of IV fluids, antibiotics, vitamins, and things standing on a loading dock in Georgia and I want them down here, and you guys are going back and forth with these landing crafts tracks. I’d certainly like to have those.”

In short order there was a string of 15 trucks arriving, with Dr. Glenn—freshman medical student—in the front. The military folks wanted to stop the convoy because he was clearly a civilian, in his white coat, but the colonel confirmed that he had given his permission.

Dr. Glenn went on to set up numerous IV clinics and got a rehydration center started before returning back to the U.S. He realized that imagination and just a little bit of initiative can go a very long way.

“There lots of things you can do just by applying what you already have,” he says. As a first-year medical student, I wasn’t doing liver transplants but I did have some skills, and I thought, ‘Let me see how it is that things can be distributed far better than they now.’”